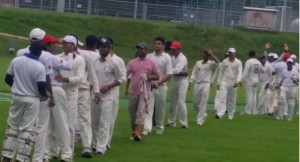 The rain interrupted the match in second half of the game, but GESLCC have managed the game well to reach to the target score of 125 with only two wickets. The match ended by 22.3 overs with good friendly cricket spirit, adding 10 points to  the qualification round  for the quarter  finale .

The toss won by GESLCC Captain elected to bowl.  At the second over, Ravi took two wickets for 2 runs; the first with a brilliant catch behind the wicket by wicket keeper Captain Zarook and the second catch was taken by Arun at the mid-wicket position. The loss of two important wickets for 6 runs put GCC under severe pressure.  GESLCC increased the pressure by enforcing with good fielding at this point.  Saad and Anser continued their partnership of 43 runs until the 14thover.  Saad who scored 14 runs was bowled by Lalantha.  Anser was bowled by Ravi when he was 25. Ahmam scored a solid 56 and was not out (the highest scorer in GCC innings).

During the innings, the wicket keeper/Captain Zarook took four catches behind the wickets , this helped the team to move forward and get confidence to  challenge the opponent . Zarook’s wicket keeping skills and his flexible fielding style was a highlight during the game.

Wadood best averages 4.67, took three wickets in a his fourth over.

GESLCC superb bowling and fielding improvements have restricted GECC to 125 runs in 30 overs.  Majuran , Ravi, Lalantha, Wadood,  Uddika and Selvan have demonstrated taking their bowling spells  during the innings with a much determination during the CSPL quarter final .

The GESLCC openers Uddika got out for 11 runs while Sanjeewa brilliantly score 51 not out. He scored his first half century to the CSPL record book.  Then Selvan scored 1 and Ravi scored 42 not out.  Ravi’s performance of  both batting and bowling during this match were very much appreciated by the team mates.  Bravo!

The umpire, Mr Habib during CSPL was extremely professional and fair.  The club management appreciated Dugal Janz initiate to accepted for second umpire with standing as a GESLCC reserve bench in this game.

GESLCC would like to thank Anser and his team for hosting the match and for their hospitality.   Special thanks for Janaka , Mano, and Mina  who organized a barbeque and music  for  entertainments.

Junior player Mohamed Zaahid has started to keep a professional score card and will help the team in the feature games. He is also a reserved junior player of the GESLCC squad.

The club management congratulated the players for their best efforts and wished them to continue with a similar game spirit in the future.