Porto Tour ended with a tie

The team rested well and had dinner at the famous Matosinhos in port at the Porto fishermen restaurant where they served a verity of sea food with Porto wine.

After the English breakfast on Saturday morning at the club house, the team followed to the grounds at 11 am where Captain Dugel won the toss and elected to bat first. The GESLCC openers Uddika & Gajan scored 37 runs in 4.4 overs and lost the first wicket. Dugel then join with Uddika lost the 2nd wicket at 47 in 6 overs. Lalantha &  Dugal’s  partnership brought the score to 97, however, Lalanth was bowled at 24 runs while Dugel was caught behind the wicket by the first slip at 39 runs.  The next highest scorer was the batsman number nine, Wadood who scored 27 runs Inc. 2×4, 2×6 –  not-out.  The GESLCC team all out for 155 runs for 32.1 overs.

O’porto Club responded to that target of 155 runs with a loss of six wickets within 38.2 overs. The Highest scorer in the team was the opener Vinod Chalindra who scored 86 runs (4×9) (4×6) – LBW by Lalantha.  Syed Ali, and Kumar both scored 16 runs each.

Unfortunately, the pace at which the GESLCC started scoring as if in a 20 over game did not help the game.  Wrong strategy by the GESLCC gave the game away too easily during the first match.

Once the match was over, the club members gathered for dinner at the club with the former secretary of the Club Mr. Rajani who were accompanied by his wife. The club had prepared Portuguese barbecue, served with Mateus rose & port wine. This year GESLCC invited some guests (family and friends) to the weekend of Porto tour and among them were Mr & Mrs. Chinta Rajap, Mr. & Mrs. Mounir Baron, Mr. & Mrs . Manjula Devi, Mr. & Mrs. Lalantha Sirisenage, Mr. & Mrs. Ravi Mina, Mr. Sanjaya , Gajan & Dereck.  The party ended up late night after the speeches by both captains of the teams and the Manager of the GESLCC .

The On behalf of the GESLCC management Sunil Perera thanked all players and guests who participated this annual club event and wished everyone success! 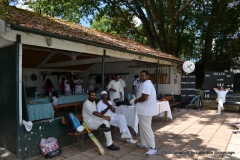 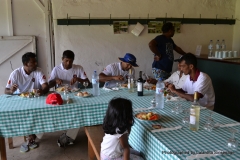 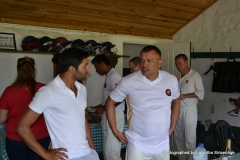 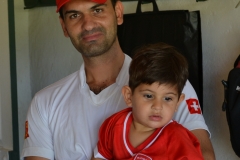