The GESLCC fielding was somewhat questionable 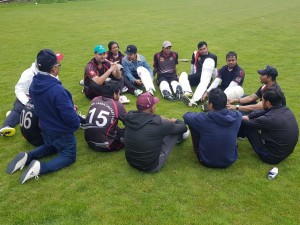 The 16th Over was the game changer of the match! GESLCC won the T20 by four wickets at Cossonay grounds on Sunday 19 May. The partnership of the middle order batsmen Zakir & Zarook; 18 balls 18 runs and three balls 9 runs respectively, made the difference in a successful end.

The GESLCC won the toss and elected to Cossonay to bat first, they have scored 120 runs within the allocated 20 overs for the loss of 9 wickets. Then reply to chase target score the GESLCC top order batsmen failed to keep a good partnership due to excellent bowling attack with super fielding by Cossonay CC. In that, Wadood got out for 2 runs and GESLCC lost 6 wickets for 106 runs during 16.4 overs. Zarook, the wicket keeper, joined Joseph Zakir to form an incredible partnership towards the end; Zarook’s hit huge six to mid wicket and three runs in the same over to reach the Cosonay CC total. Zakeer then completed the winning run with 1.3 overs remaining.

The GESLCC fielding was somewhat questionable as few catches were dropped. The batting could be dramatically improved, particularly with a strong batting line up with experienced players. The Management sees potential for improvement for future games. The team spirit was high and all players have contributed to the game according to the club expectation. Fifteen players were present at the grounds covering scorning, umpiring, and supporting the match.

After the match, everyone was invited for a private dinner at Morges. Congratulations!