“The Opener Sanjeeva’s first half century” 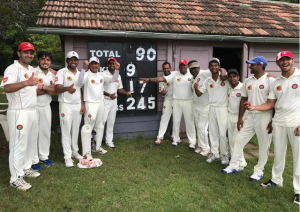 The Opener Sanjeeva’s first half century and an excellent fielding performance lead to 153-run win over the second CSPL match against GICC played at Bout du Monde last Sunday.

Sanjeewa, the opening bat stood 2 hours facing 20 overs to hit 113 runs (second wicket partnership) when he was caught at mid-on by Amar.

The Toss was won by GESLCC and decided to bat first with unpredictable weather on first half of the game. Fortunately, the match was not interrupted due to bad weather and played all 40 overs by GESLCC with a lost of 9 wickets and scored 245 runs.

After the break the match resume with better weather condition. Amar & Balihar of GICC openers faced Lalantha scored 13 runs at the first over. Immediately after, Lalantha took the first two wickets at 29 runs while Idris bowled seven overs and took three wickets for 27 runs. John Mosses of GESLCC, a new bowler, took one wicket in three overs for 10 runs. This was followed by Ravi who took 1 wicket for 26 runs & Majuran took 2 wickets for one run.
The GICC highest scorer, Amar who scored 50 was caught by Lalantha at cover .

This was a result of the GESLCC captain Mounir’s strategic approach to slightly change the batting order of the team. Mounir was quite happy with both batting and bowling of the team during this match and how the changes worked in favor of the team.
The club management Congratulated the team for their excellent performance.
Please follow this link to get full score card;