The unbeaten GESLCC met with an unfortunate incident at T20 PickWick competition. One of the GESLCC top order batsmen had an accident (ball shot to his face due to uneven surface of the matt) and was immediately admitted to the hospital in Bern. 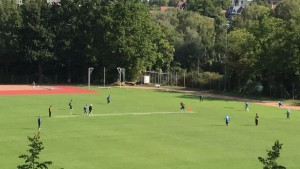 GESLCC lost by D/L at the second Semi final between GESLCC Vs St. Gallen CC at Bern Ground.

The match was resumed after about 45 Minutes interruption. The D/L calculation was to get 140 runs to chase within 14 overs. This was a heavy responsibility for the middle order batsmen to take the challenge towards the end within allocated overs. The team only score 73 runs for 7 wickets and lost their chance to go to play the Pickwick final on the same day in Bern.

The match was played on unconventional & uncomfortable artificial wicket on the grass. Certain areas had boundary lines while all the other lines mark on the rubber mat were not visible to the umpires.
There are certain decision that had been taken by the umpires were not accepted by supporters and spectators. This was an unfortunate circumstance.
On behalf of the Geneva Sri Lanka Cricket Club the club management congratulate to the T20 Pickwick Cup Champions 2017 (Olten CC) and the Runners-up St.Gallen CC for their excellent cricket performance during semi and the final games on Sunday 20th at Bern.