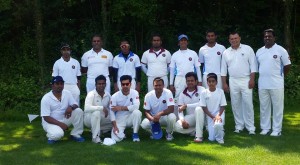 Cossonay CC batted first and scored 253 runs for a loss of five wickets during the allocated 40 overs.   Sathya gave 3 catches during his innings but GESLCC dropped them all and therefore ended up with a score of 116.  Saurabh 69, and Guance 30 which lead them into a strong position.

GESLCC openers Uddika and Sanjeewa brought the partnership to 71 within the first 11 overs resulting a strong position. Sanjeeva got out for 15 runs (first wicket of GESLCC). Selvan joined with Uddika to bat but unfortunately soon after, Uddika was caught when trying to hit a 6 at long  on boundary line.  He was 51.

Majuran and Lalantha got out for no runs, followed by Dugal and Ravi who only scored 1 run each. This was the consecutive batting collapse by the top order of GESLCC.

Selvan scored 26 runs with very good cricket spirit while he enjoyed the game with his calm steadiness on the wicket.  This was a major contribution to the team when GESLCC lost five wickets in a row.  The tail end continued until the 37.3 overs, totalling a score of 184 runs.

Congratulations to Krishantha who replaced Wadood scored a classic 50 at his inaugural play at the CSPL league match at number 7th position.

The Club  sends a strong message to make every effort to gather necessary skills and practice for future games.  A serious change is recommended to the players by the Club Manager, Mr. Sunil Perera in order to qualify for the CSPL quarter Final!

Congratulations to Cossonay CC (won by 63 runs) and merit this victory with their both excellent batting and fielding performances.