Young & the energetic won the match 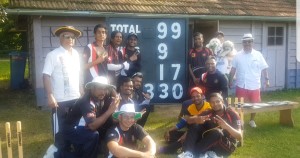 The GESLCC new team spirit propelled the friendly match to a winning position against Cern CC by 231 runs. The play started at midday and ended up by 6.30 pm. The match was concluded with fielding practice which they need to improve. The Cern CC had to face enormous responsibility to face 330 runs to chase the target. Unfortunately, Cern CC was all out for 99 runs within 17 overs left.

The toss was won by GESLCC captain Arun.

Neil who went one down, scored 17 runs with three 4s. Zakir & Ravi’s partnership brought the scoreboard up to 168 while Ravi was caught at 28 runs with one 6s & five 4s. Zakir, the highest scorer made 79 runs with ten 6s & 4. Then followed up with super batting performances by Zarook 28 , three 3s One 4s, Sathees 30, five 4s & Arun, two 6s not out. Praminda 2 runout & Zahid 1 run not out while Mithusun did not get much of a chance to bat.

This batting performance brought the total score to a whopping 330 which is one of the highest scores for the past couple of years.

Our bowling and fielding must further improve.

The club management has set up a task force to help the new generation to improve their talent as they wish.

The GESLCC management congratulated excellent performances & their motivation. Also, would like to thank those who were present at the ground to support the team.